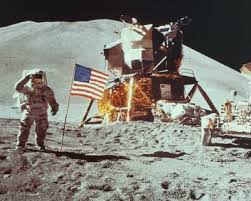 Jason commemorates today's anniversary of the moon landing with a link to the moon while Rex L. Camino gives the most concise argument I've ever heard for faking it.
by Patrick at 8:33 PM

not that I think you believe it was faked, but one of the (many, many) arguments against the fake was the fact that we have instruments on the moon that are routinely used to calculate the change in lunar orbital diameter (currently about 1cm bigger per year). This is achieved through using a very carefully placed set of mirrors that the Apollo 11 (I think) astronauts placed on the moon, aimed at the Earth. Scientists here shoot a laser beam up to the moon and hit this 4ft sq instrument. The laser is bounced back and the delay is carefully timed and then divided by the speed of light. Voila: lunar distance.
This kind of thing can't be faked.
Ah yes, the doubters say, they could have sent the instrument up there robotically! Nope, not with the kind of accuracy they needed to place it. If they had this sort of ability, they'd just as soon send people anyway.
I'll be glad when we develop the next gen space telescope that can resolve the Apollo stuff still on the surface. Then we can get past these silly conspiracy theories and on to better things.