Saturday was our EPCOT day. It began like any other park visiting day for us... up at the crack of dawn, ready to attack.

Future World opened at 9:00, so we were in the parking lot by 8:20, ready to get in line. According to the crowd calendar, Saturday was a "5," very reasonable crowd levels. From our last trip, we learned that you don't have to break your neck trying to get in the turnstiles... they have developed a very orderly system to park entry.

At 8:45, they began letting people into the park, past Spaceship Earth (into the gift shops, surprise!) and to the fountain area between the Innoventions buildings (formerly Communicore) for a rope drop. After they drop the rope, cast members walk you to the various top tier attractions through the Innoventions walkways.

We headed first to a ride that we discovered in Anaheim, Soarin' and promptly FastPassed it to ride it again. Even though it was only about 9:10, our return times on the FastPasses were after 11:00.

From there, we hopped a bit ahead of our touring plan because we didn't really care for Mission Space the last time we were there and headed to another favorite, Test Track. Again, following the touring plan, there was little to no line for the attraction.

We hit the rest of the Future World attractions that interested us, riding both Journey into Imagination and Ellen's Energy Adventure for the first time for both of us. Well sort of for the first time. I had ridden the original Universe of Energy ride many years ago. 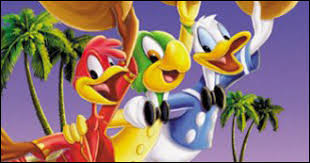 We had lunch at the Lotus Blossom Cafe and then stopped by the Mexico pavilion for the newly refurbished Gran Fiesta Tour featuring the Three Caballeros. The boat ride is a hunt for Donald, and is a neat sound and light tour through Mexican culture. It continually amazes me how immersive Disney can make its ride experiences, even with the limited space and technology that this pavillion has.

When we left the park, for the second day in a row, we thought it would be quicker to walk to our car than take a tram... and got passed by the tram. Especially at Disney's Animal Kingdom (which... is the proper name of the park... not just "Animal Kingdom," lest you forget whose it is...) the bizarre parking lot topology (note that only the blacktop is guest parking... the white concrete is cast members) means that inevitably, the tram is your best bet.

During the afternoon, we headed back to our "resort" for a quick nap, and that evening, headed out to procure washcloths (see the trip advisor post...) and check out the Disney's Character Premiere outlet store. If you're looking for last year's souvenirs at half price, this is the place for you. Lots of "2006" things, and winter clothing. It was worth the trip though... we did find a few things we couldn't pass up. We had dinner at the very quiet and relatively kid free Outback Steakhouse near the mall. It was also nice to see "real world" prices on a menu!
by Patrick at 9:00 PM