lunch with the big cheese 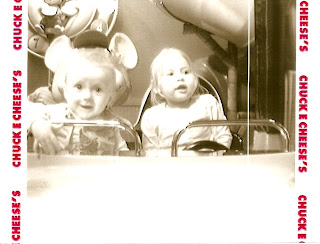 Adam and Alysa
Today, the three of us went to The Biggest Best Sixth Birthday Party Ever for Sara Caitlin Owens at... you guessed it... the Biggest Best Place for a Winter Birthday for a Six Year Old: Chuck E. Cheese.

Since the big mouse came into existence during both my childhood and Lydia's, we hadn't been in... oh, twenty years or so, and had pretty unfavorable impressions of the current state of the store based on hearsay. In fact, a quick Google search brings up all kinds of questions.

The good news: we had a great time. Here's the list of things that exceeded our expectations, and each one is rated on a scale of one to five cheese blocks, five being the best.

There really wasn't anything to write home about that tainted the experience. Oh sure, you had the odd skeeball lane not working, or moment when you thought "could there be any more kids walking right here??" and the food is overpriced for what you get. Maybe it was being around great friends, or maybe it was seeing Adam take his first "carousel" ride (not really a carousel, but you know...) but I think with a certain young man's future birthdays happening smack dab in the middle of winter might predict that a mouse other than Mickey might be getting a few of the Watts dollars in years to come. Just keep the Coke Zero, Chuck!
by Patrick at 10:03 PM