This past weekend had to be the hardest fun we've ever had in about 50 hours. It all began with Parent's Night Out at church. We had the ones and twos, all mostly twos by now, and one three. It was a light bunch, only five kids, because of various illnesses and Williamson County's lack of school days. The kicker was, at the end, we got to take home one of our favorites. (They're all our favorites, of course... we just got to take one of them home.)

Sara's parents went to see 1964 at Municipal Auditorium. Sara spent the night with us, sleeping fairly well for most of the time. She was a little wound up. The next morning, she assisted in breakfast preparation, and Philip and Susan came over to join us and pick her up.

Note that the headgear in the picture to the right was at Sara's behest.

Saturday afternoon, I went to play in my first ever church golf tournament at Greystone Golf Club. It was actually the first 18 holes I've played in about two and a half years... and it showed. Jason, Charlie and Rick were very gracious and understanding of my ineptitude. Thank goodness for best ball rules. I think the core of my problem was being out of swing shape, and tired out after about nine holes.

That evening, one of Mama's friends from way back when came to visit. Kay got the grand tour of our house. Daddy took us all to Las Palmas and then we went back to the house for coffee and ice cream. We talked for quite some time. 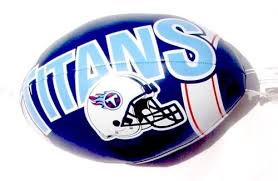 On Sunday, we went to church and then to see the Titans drop one to the Bengals. However, it was fun to see our neighbor get a few killer tackles. It was a really good game, and we got to hang with our friend David and his four year-old Jacob... who never did quite get the hang of the fireworks. He spent most of the time with his ears covered, worried that there would be another bang when he wasn't expecting it. Afterwards, we went to SATCO for a snack (where we had our first ever date!) and then back to church for the evening festivities.

Now we need a weekend to recover from our weekend.
by Patrick at 4:00 PM