in a city of masters 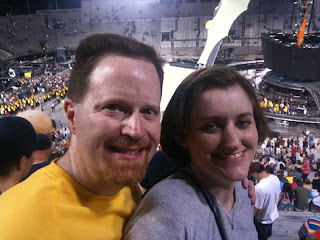 Okay, I'll admit it. I'm still basking in the glow of Saturday night's amazing experience. The word "concert" doesn't do it justice.

It was my first time to see U2 live, and the first time they've played Nashville in nearly 30 years. (They played MTSU in 1987). I'm glad I didn't see them play in another city, because seeing them here was so special.

I've lived in and around Nashville my entire life. It wasn't that long ago that the entertainment business didn't give this city a second thought.

Few outside Nashville knew or even cared when the CMA Awards were. Country acts were seldom seen on network television.

All that changed in the 1990s when country music started hitting the mainstream. Garth Brooks was filling arenas. People outside Nashville were starting to notice the depth and breadth of talent here.

It had been here all along.

Back to Saturday night - the heat and long wait for the reset after the opening act had made the crowd somewhat lethargic, in my opinion.

Early in the evening, Bono mentioned the fact that they had not played Nashville since 1981. When he said, "In a city of masters, we will stay students. We are students. Will you sing with us?," everyone forgot how hot they were. People realized he "gets" Nashville. When he dropped names like Johnny, June, and Amy, well, he had that crowd in the palm of his hand.

Bono also said, "You people are extraordinary people in all your areas of music," which is probably the highest compliment he could bestow.

I've said for years that the best kept secret about Nashville is that there is more to it than just country music.

By the end of the evening, the performance and experience was so incredible, I could barely take it in. But wait, there was more.

After the last song, Bono asked a man in the front, "What do you want to play?" He pulled the man on stage and handed him his guitar. What those of us in the audience didn't know at the time was the man was holding a sign that said, "Blind Guitar Player."

He wanted to play "All I Want is You" for his wife. The man started playing, Bono sang, and the rest of the band eventually joined in. When the song was over, Bono gave the man his guitar.

Years from now, I think people in Nashville will ask each other, "Were you there the night Bono gave the blind guy his guitar?" Everyone there was given an evening they'll never forget.
by Lydia at 5:06 PM