for love of sixties 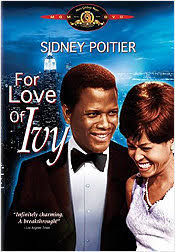 Lydia and I spent Saturday night watching For Love of Ivy, a 1968 vehicle for Sidney Poitier. The movie itself is very slow, lending itself well to the home video environment... allowing you to get other things accomplished (like folding laundry... or blogging!) while it's running.

Roger Ebert's review, written when the movie first came out, is great... written like you should view the movie now, with a critical eye not toward the plotline or performances, but toward its overall portrayal of racial perceptions and the era. Ebert points out that although it was created concomitant with its setting, it is in some ways an idealized version of reality, and not to be criticized for its idealism. It's supposed to be a romantic comedy - a genre not really known for its grasp of reality. He also notes Beau Bridges' s performance, which does make the film fun to watch.

The best reason to watch the movie now is its period appeal. Bridges's hippie wardrobe is simultaneously right on the mark and hilarious. Abbey Lincoln goes to a Japanese restaurant to meet Poitier for dinner where she is helped off with her shoes, is shown to the table where her date is seated on the floor behind a rice paper screen, and the meal begins with Poitier being fed by one of the Japanese waitresses. Poitier runs a trucking company, but one of his trucks is actually a hidden casino on wheels. This, of course, allows everyone to get all dressed up and look and act sixties stylish. The whole "quest" of the movie is to get to New York... the swinging, stylish paradigm of all that which is that decade.

Half the fun of the movie is playing "spot the reel-to-reel player," counting the number of cigarettes that are smoked and offered, and "made-to-shock" references to illicit drugs, sex and racial things that have very little shock value thirty-seven years later. One of the biggest scenes probably played for laughs originally is when Bridges's character announces that he has a solution to all the developing conflicts in the film by proposing that he and Lincoln get married. The concept would have been extremely outside the box to the average moviegoer in 1968. Waaaaaay over the top is the performance-art/sitar band bar that Poitier and Lincoln go to... the ultra-lounge sixties epitome. The DVD transfer is great, with the sixties colors popping off of the screen. Quincy Jones's score makes it feel at times like a made-for-TV movie, but it does give it a real sixties flavor. And if Quincy's score wasn't sixties enough, buried within the movie is a song written by B.B. King and Maya Angelou.

The one line that jumped off the screen to me... that I haven't seen yet in a review or commentary online was during one of the opening scenes when Mrs. Austin was trying to convince Ivy that she needed to stay in their employ as their maid and not go off to the city to get an education and new career. She's making her case in every way she can think of, and hits the thought that maybe Ivy is looking for a more personal relationship with the family, because Ivy has always called her "ma'am." When she does, Mrs. Austin replies, 'oh Ivy, I've been meaning to ask you to to call me Joan, like my friends." I imagine that Poitier crafted this line to be the subtle way of showing that despite the family's spoken love for Ivy, the truth is that they really had no concept of treating her as family, equal, or even friend.

For Love of Ivy isn't a must-rent by any means, but it is a groovy way to spend an evening... provided you're not too square, daddy-o.
by Patrick at 8:03 PM

You should'a been there it was a real gas.