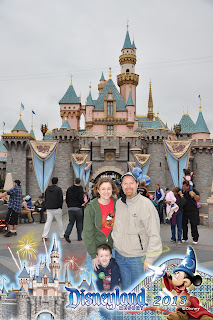 People have asked us since before Adam was born, "When are you going to take him to Disney?" (He went four times in my belly.) Our answer the past couple of years has been "Whenever he goes to the potty or can pay for himself, whichever comes first." Well, let's just say we paid for this trip. Seriously, we've been enough times to see plenty of kids there who are too young to appreciate it and would rather be somewhere else. Adam is also 43 inches tall, which means he can ride pretty much everything, height-wise.

We decided a long time ago that we wanted Adam's first Disney experience to be at Disneyland, and so he needed to be able to handle at four-plus hour flight. There are several reasons for this:

1) Disneyland was the only park Walt Disney ever saw completed. You can feel him there. There is something more nostalgic, more pure, and maybe even more magical there.

2) Size and scope. In California, there are two parks instead of four, and they are a few hundred yards apart. It is much less overwhelming. Off-property hotels are in walking distance of the parks. The hotel where we stayed in a two-room suite was in the $88-$150 range and closer to the parks than the Disneyland Hotel. We never had to ride a parking tram, ferry, or monorail to get to the parks. If you've ever asked us for advice on where to stay at Walt Disney World, we will always say stay on Disney property if at all possible. It is a totally different situation there.

3) Cars Land. Several years ago, Disney decided to spend a BILLION dollars on Disney California Adventure and make it the all-day park it should always have been. You can tell. Basically, they recreated Radiator Springs from the Cars movies in real life. It is amazing. Adam has loved the Cars movies since before he could talk. All the parks have princesses a-plenty, and now there is finally something for boys. We didn't tell Adam about Cars Land before we went, and he was pretty excited when he figured it out. If you have a boy, it is worth the trip to California. There is talk of putting a Cars Land at Disney Hollywood Studios in Florida, but it would be several years away.

Patrick posted on Facebook what we learned about doing Disney with a kid:


So, after my first trip to a Disney park with a kid, I COMPLETELY understand how there are people that say, "I hate going to Disney." Here's how to avoid that:

- Set expectations. Do not go in without a plan. Do not walk in the gate and allow your child to be the driver for what you do. If you approach each day with a TouringPlans, you will get tons of fun in a short amount of time. Make them a part of checking off the list. Explain to them that if they see something that they want to do, you'll take a picture of it with your phone so that you can remember. Then, when you've done ten rides in ninety minutes, you can branch out and do things you missed.

(I've heard lots of arguments about why this is not a good idea - lack of spontaneity being the top one. Here's the deal though: I'd rather trade four non-spontaneous hours to have eight truly happy spontaneous ones any day.)

- Give yourself enough time daily, and for the length of your stay. Set alarms and reminders so that you are ahead of schedule all the time. An unrushed morning, nap time, or meal can go a long way to rejuvenate. Add a day more to your vacation than you think you're going to need.

- Budget. Don't complain about the costs of things. Or, if you feel like you have to complain, do it in advance and zip it for the trip. In fact, save up more than you think you need for the trip, and then be happy when you have money left over. This was my first trip to REALLY do that, and we are underspending by a long shot.

- If you have multiple kids, divide and conquer. Let the preschoolers go with one parent and the grade schoolers with another.

- Pack snacks. For everyone. An 8 oz can of Coke is a great in-line boost for the parents, and a juice box can reset an attitude in a second (or at least silence a whine.)

- If your child is under 40 lbs, plan to have him/her on your shoulders. A lot. Work out beforehand. Do squats. Little legs get tired faster than big legs. Face it.

- Don't tolerate whining. Explain that whining results in leaving, and that will help. Don't hesitate to "stop the car" in the middle of the park and have an eye-to-eye conversation with your preschooler.

- Understand there will be times when you do things that seem counter intuitive, like hiking through Tarzan's Treehouse when there are better rides right next door, or not using your Radiator Springs Racers fast passes at the end of the day, or a three hour nap when you paid $80 a day for park tickets. Not the end of the world.

Bottom of Form- One more tip. There is exactly no rule of thumb when it comes to what your kids like, and you have no way of anticipating it. For instance, Adam has decided that he is not a fan of dark rides. So no Peter Pan, no Snow White. He did, however, surprise us with roller coasters. What's important is that we listened and found this out. With multiple kids, this is where "divide and conquer" is vital.

The weather was pretty cool when we were there, and so you won't see any of the cute t-shirts I took for Adam in the pictures. We were wearing coats and hoodies pretty much the whole time. Somehow, in Southern California, even cool temperatures are more pleasant.

Also, because of the time change, we didn't do any of the nighttime shows. Adam did a good job of telling us when he was done for the day.

Enough talking. Here are the pictures.